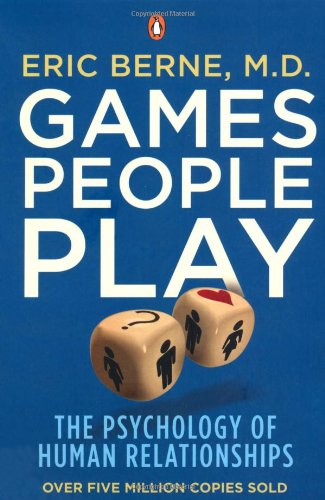 Have you ever said to yourself “I can’t believe this has happened to me again!” or “why does this always happen to me?”. If so, there are high chances you have been involved in playing what’s known in the TA world as a game. We all play games. We play them often. Eric Berne famously said “do not ask whether you are playing a game, ask which game you are playing”. If we can spot our games and nip them in the bud we can move towards intimacy with the people around us and be more contented as a result. Read on to find out more about games.

Last week’s article looked at how us humans structure our time (click here to read). Berne observed that humans hate to be bored and will carry out one of six methods for avoiding it. Playing games is one of those methods. Games deserve a whole post to themselves becauseÂ they areÂ interesting, important and demand a fair bit of explanation.

What is a game?

“a series of duplex transactions which leads to a switch and a well-defined, predictable payoff which justifies a not-OK, or discounted, position”.

Let’s have a look at what that actually means. Firstly, what’s a duplex transaction? A duplex transaction is where we say one thing and mean another. Only about 8% of our communication is through words, the rest is through, tone, body language and facial expressions. Berne observed that whenever we say one thing (the social message) and mean another (the psychological massage), it’s always the psychological message that gets heard. A classic example might be the old “do you want to came in for a coffee?” at the end of a date. The social message is about coffee, the psychological message is about sex (unless you are Tom Hanks in Big!).

So we tend to open games with duplex transactions, not saying what we really mean, scared that the intimacy involved will get us rejected or hurt. Usually then, the game will proceed to deliver us some positive strokes until the “switch” clicks in.

The switch is the point at which things suddenly feel like they are going wrong. It’s the point at which we may feel confused, scared, angry, or whatever our racket feeling usually is. This usually leads quickly to us taking a “payoff”. This is a confirmation that whatever negative (untrue) thoughts we have held on to about life are true.

Let’s give an example of a game and take it apart using the language introduced above. Let’s take the common game “Yes, But”. This is where one person has a problem and another person is invited to solve it. Everything the other person suggests is rejected with a “Yes, I could do that, but..(insert reason for not doing that)”. We all know people who play this. We may even play it ourselves.

Whilst it may appear the player is asking for help on the social level, what they are really doing on the psychological level is proving that they can’t be helped and no one else can control them. The switch comes when the other person gives up trying. The payoff for the player is proof that no one can help them even though they remain passive. This may be accompanied by feelings of sadness or anger, the feelings that the player learnt were acceptable to caregivers as a child.

The other player in this game may feel helpless and frustrated that they have been unable to help the starter of the game â€“ these feelings are likely to be very familiar too and reinforce a belief that they are not a very good friend, problem solver, therapist, etc. It takes two to play a game.

Why do we play games?

Games are a way in which we can get strokes without risking intimacy and confirm our beliefs (mostly wrongly held ones) about life.

How do we stop Playing games?

The first thing we need to do is identify what games we are playing. Ask yourself what patterns keep emerging in your life? What predictable events occur? What feelings do you often end up having? A good TA therapist will speed up this process dramatically because we play games out of awareness. They will be able to spot the games and bring them into the light where you can chew them over and decide whether you want to keep on playing or you choose to do things differently, avoiding the negative payoff along the way.

In this article I have barely scraped the surface of this interesting and deep theory. If it’s a topic you want to find more out about, I suggest you read Games People Play: The Psychology of Human Relationships, the book Eric Berne wrote just about this fascinating subject.

For Transactional Analysis Therapy in Manchester with me, contact me using my contact form or ring me on 07966 390857